In recent years, both financially and electrically, integrating battery energy storage systems into existing and new buildings has grown significantly easier. Powerwall installation in Canada is now cheaper than ever thanks to dramatic reductions in manufacturing and material costs.

And the home energy storage market in Canada is just getting start.

Why Install Tesla Powerwall in Your Home?

People can now use Powerwall instead of relying on the grid, which is typically fueled by carbon-intensive fuels like coal or natural gas. When the grid goes down, Powerwall lets solar power systems generate electricity, giving homes more energy independence and control.

When combined with a solar power system, the Tesla Powerwall Canada decreases one’s reliance on the power grid. It is now feasible to live independently and sustainably without sacrificing one’s lifestyle.

The capacity of the Powerwall allows users to use stored solar energy during the day and night, reducing or eliminating the need for utility providers and their typically dirty fuel sources.

Are you prepared in the event of a disaster or a power outage?

When the grid goes down, the Tesla Powerwall delivers backup energy for your home. The risk of being unprepared grows as climate change produces increasingly extreme trends.

Time of Use Control

Time-of-use billing, or TOU, is a practice in which some countries charge customers more for power at specific periods of the day. Home battery energy storage devices offer significant financial benefits if your electricity is TOU organized.

TOU is only available in a few places. The provinces of Alberta, British Columbia, Saskatchewan, and the Northwest Territories, for example, do not employ time-of-use power billing.

Users can program charge/discharge times as well as the amount of battery reserve they want to keep. Users may observe how electricity flows between the grid, powerwall, solar panels, and their home’s loads in real time using the app. clean graphs depicting household consumption, solar electricity generation, and grid exports provide useful information.

The capacity and performance specifications of the Tesla Powerwall are unsurpassed in the residential energy storage industry.

The inbuilt inverter in the Powerwall allows for direct connection to any electrical panelboard. Outside, Powerwall can be installed, although it is not advised for most Canadian regions. When batteries are kept at or near room temperature, they perform best.

With no exposed wires, heated vents, or poisonous fumes, Powerwall is touch-safe, child- and pet-friendly.

Grid-connected applications are the most prevalent Powerwall integration in Canada. With Powerwall, you may now go completely off-grid (no electrical connection to the utility grid) or provide backup power in business applications.

The Tesla Powerwall Canada uses a technique known as grid-forming to mimic the frequency of the electrical utility grid. In contrast to traditional anti-islanding behaviour, which turns solar power systems (particularly, the inverter(s)) off in the event of a grid failure, this feature permits solar panels to continue to work in the event of a grid loss.

If your home already has an electrical utility connection, staying grid-tied is the most cost-effective alternative. This is discussed in further detail further down.

Grid and stored energy interact with one another in a seamless and automatic manner. When the grid fails, Powerwall detects the outage and continues to deliver power.

There will be no delays. There is no need for manual switching.

There are two types of Powerwall installations of grid-tied Powerwall in Canada: whole-house backup and critical load backup.

Whole-house backup, as the name implies, delivers power to the entire house. To effectively power your home, this method usually necessitates the use of multiple Powerwalls.

In the event of a grid outage, Powerwalls (and solar panels) connect to your main electrical panel and provide electricity to all loads. 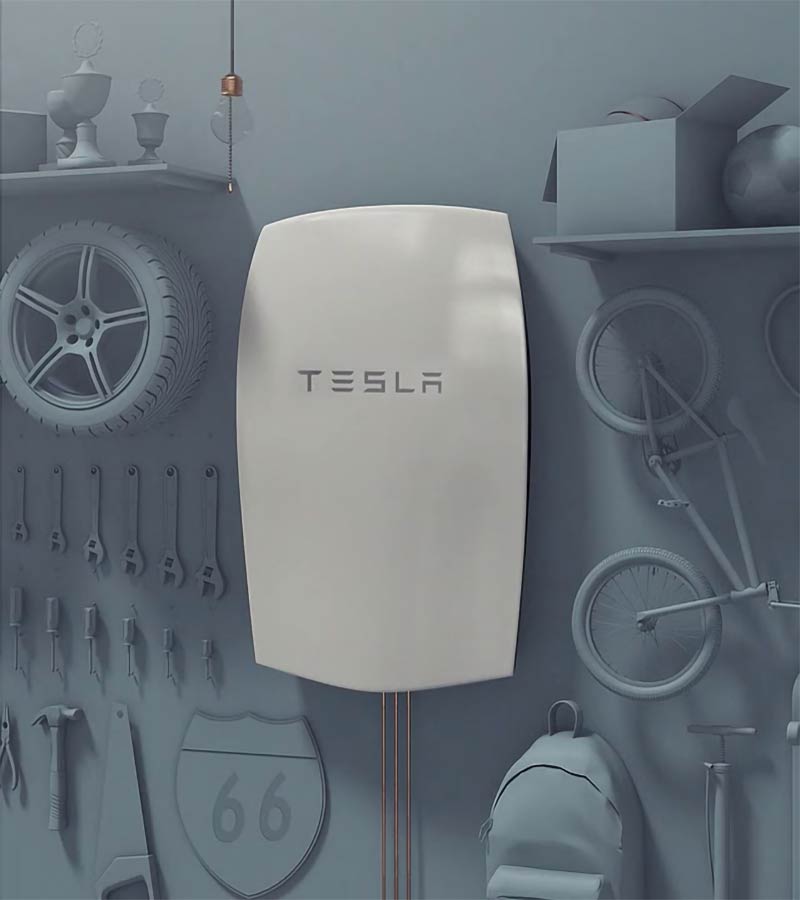 A more usual strategy for deploying grid-tied Tesla Powerwall Canada is to power important loads. Clients can save money by reducing the number of Powerwalls required to meet their demands by just powering key loads.

This strategy necessitates the relocation of a home’s critical loads to a separate subpanel. These vital loads will be supplied by Powerwall and solar energy in the case of an outage, while the non-essential loads in the main panel will remain inactive.

With a working fridge, freezer, internet, boiler, and select switches and outlets, you and your family can weather any storm and still live comfortably.

Living off-grid with Tesla Powerwall is now possible thanks to a recent update.

Off-grid living is now available without losing lifestyle if electrical utility connections are too expensive to build or just aren’t desired.

A minimum of two Powerwalls and an internet connection are required for off-grid installations. It is very advised to keep a backup generator (diesel, gas, or propane) on hand in case of extended blackouts.

Tesla just published an upgrade to the Powerwall application that allows it to offer backup power to 208V commercial services.

This is a game-changing update that now allows for the secure backup of vital commercial infrastructure including servers, computer banks, and other critical gear.

How Long Will Powerwall Last in an Outage?

Days or hours of autonomy refer to how long Powerwall lasts during an outage. A BESS’s autonomy is determined by its capacity as well as the types of loads that are used and for how long.

Tesla has put together a fantastic tool for calculating autonomy based on various load conditions.

Powerwall will last about 1 to 2 days, but it may be extended to 7+ days by changing your lifestyle or installing more Powerwalls. Solar panels will charge Powerwall, but it’s worth considering how long it’ll last without it if the power is off in the winter or during long periods of overcast weather.

Is it Better to be Grid-Tied or Go Off-Grid with Powerwall?

Your desire, finances, and property will determine whether it is better to be grid tied or live off the grid.

Cutting the cord’ is a frequent aspiration among people who want to take their energy independence to the next level, but for the ordinary BC, Alberta, Saskatchewan, YT, or NWT homeowner, it may be prohibitively expensive.

In comparison to battery systems that complement the grid, living off the grid in Canada necessitates extra energy storage capacity (and expense). Furthermore, off-grid living usually necessitates the purchase of a backup generator in case of inclement weather or equipment failure.

Without backup electricity, the winter might be long and cold.

If the property is not currently grid-connected, the cost of building a grid connection (supplied by a utility company such as Fortis, ATCO, SaskPower, or BCHydro) versus the cost of installing an off-grid Tesla Powerwall Canada system can be weighed financially.

The cost of installing a grid connection is significantly depending on the property’s closeness to the grid. Living off the grid with a Tesla Powerwall may be the best option if the utility connection is too far away. In some cases, it may be preferable to connect to the grid and install a grid-tied solar power and battery system. In such cases, dependency on the grid can be simply reduced with critical loads backup without incurring the higher expenses associated with an off-grid solar and battery system.

Experts can guide you through this procedure and give you a complete financial breakdown.

Cost of Tesla Powerwall in Canada

The price of Powerwall and related products, as well as shipping, will vary depending on market conditions. The amount of electrical work required to install Powerwall will be determined on the size by your current infrastructure.

Equipment, hardware, installation, and shipment for the Tesla Powerwall Canada will cost between $18,000 and $25,000. If more Powerwalls are requested, the $/kWh will scale favourably.

Electrical panels that are used in conjunction with solar panels (and sometimes without) must often be upgraded to meet the Canadian Electrical Code in order to install Powerwall.

Additional Powerwalls may be necessary if greater backup energy is desired.

Tesla Powerwall Canada price is determined by a number of factors.

The easiest method to find out how much your solar power system and Tesla Powerwall will cost is to contact experts. Consider the expense of not having electricity before investing in Powerwall.

This article focuses on the Tesla Powerwall because its technical specifications are the best on the market today in terms of installation cost.

Other home energy storage systems, such as those from LG Chem, Sonnen, Eguana, and BYD, address similar issues but may come at a cost, both monetarily and functionally. We propose Tesla Powerwall as the best home battery energy storage system because of its diverse capabilities and low cost per kWh.